to losses of the form

where and are convex functions, and devised an efficient implementation for L2 regularized losses: . We now aim for a more general approach, which will allow us to deal with many other regularizers. One important example is L1 regularization , since it is well-known that it promotes a sparse parameter vector . It is useful when we have a huge number of features, and the non-zero components of select only the features which have meaningful effect on the model’s predictive power.

Having obtained the maximizer we compute .

The part highlighted in blue is where the regularizer comes in, and is a major barrier between a practitioner and the method’s advantages - the practitioner has to mathematically re-derive the minimization of and re-implement the resulting derivation for every regularizer. Seems quite impractical, and since can be arbitrarily complex, it might even be impossible.

Such a trick is occasionally useful to express things in terms of squares only. We do a similar trick on the formula for the squared Euclidean norm:

Now, let’s apply the trick to the term inside the infimum in the definition of the dual problem. It is a bit technical, but the end-result leads us to our desired texbook recipe.

Plugging the above expression for into the formula (A), results in:

The magenta part may seem unfamiliar, but it is a well-known concept in optimization: the Moreau envelope1 of the function . Let’s get introduced to the concept properly.

Formally, the Moreau envelope of a convex function with parameter is denoted by and defined by

Consequently, we can write the function of the dual problem as:

Now is composed of two textbook concepts - the convex conjugate , and the Moreau envelope . A related concept is the minimizer of (c) above - Moreau’s proximal operator of with parameter :

Moreau envelopes and proximal operators, which were introduced in 1965 by the French mathematician Jean Jacques Moreau, create a “smoothed” version of arbitrary convex functions, and are nowdays ubiquitous in modern optimization theory and practice. Since then, the concepts have been used for many other purposes - just Google Scholar it. In fact, the stochastic proximal point method itself can be compactly written in terms of the operator: select and compute .

Before going deeper, let’s recap and explicitly write our “meta-algorithm” for computing using the above concepts:

To make things less abstract, look at a one-dimensional example to gain some more intuition: the absolute value function . Doing some lengthy calculus, which is out of scope of this post, we can compute:

That is, the envelope is a function which looks like a prabola when is close enough to the 0, and switches to behaving like the absolute value when we get far away. Some readers may recognize this function - this is the well-known Huber function, which is commonly used in statistics as differentiable approximation of the absolute value. Let’s plot it:

Here is the resulting plot: 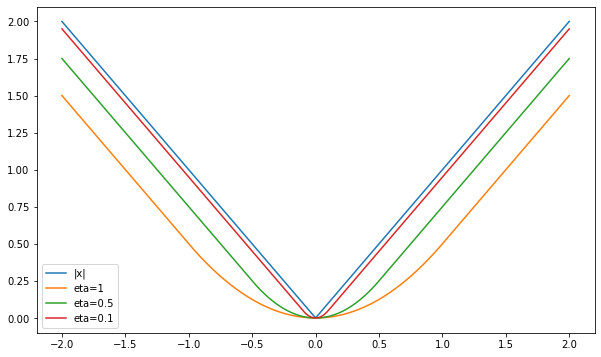 Viola! A smoothed version of the absolute value function. Smaller values of lead to a better, but less smooth approximation. As we said before, this behavior is not unique to the absolute value’s envelope - Moreau envelopes of convex functions are always differentiable, and their gradient is always continuous.

Another interesting thing we can see in the plot is that the envelopes approach the approximating function from below. It is not a coincidence as well, since:

that is, the envelope always lies below the function itself.

Now let’s get back to our meta-algorithm. We need to solve the dual problem by maximizing , and we typically do it by equating its derivative with zero. Hence, in practice, we are interested in the derivative of rather than its value (assuming is indeed continuously differentiable). Using the chain rule, we obtain:

Moreau’s exceptional work does not disappoint, and using some clever analysis he derived the following remarkable formula for the gradient of :

Substituting the formula for into (d), the derivative can be written as

With the above in mind, the meta-algorithm for computing amounts to:

Last time we used a lengthy mathematical derivation to obtain the computational steps for L2 regularized losses, namely, losses of the form

Let’s see if we can avoid lengthy and error-prone mathematics using the dual-derivative formula (DD). According to the table of proximal operators, we have . Thus, to compute we plug the above into the formula and solve:

Looking carefully, we see that it is exactly the derivative of from the last post, but this time it was obtained by taking a formula from a textbook. No lengthy math this time!

Having obtained the solution of of the equation , we can proceed and compute

which is, again, the same formula we obtained in the last post, but without doing any lengthy math.

The only thing a practitioner wishing to derive a formula for has to do by herself is to find a way to solve the one-dimensional equation . The rest is provided by our textbook recipes - the proximal operator, and the convex conjugate.

We consider losses of the form

Deriving and implementing the optimizer

We need to deal with two tasks: find and . In previous posts in the series we already saw that

and it is defined on the closed interval . The derivative is

and it is defined on the open interval . From the table of proximal operators above, we find that

The above formula may be familar to some of you with background in signal processing: this is the soft-thresholding function with . It is implemented in PyTorch as torch.nn.functional.softshrink, while in NumPy it can be easily implemented as:

Let’s plot it for the one-dimensional case, to see what it looks like:

Here is the result: 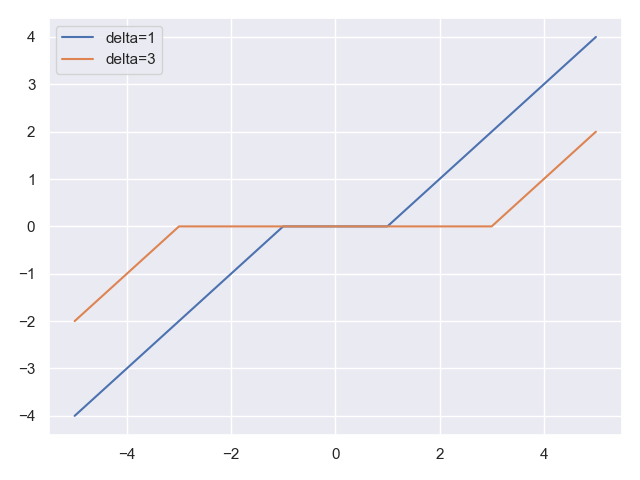 The function zeroes-out inputs close to the origin, and behaves as a linear function when our distance from the origin is .

At first glance it seems like a hard equation to solve, but we have already dealt with a similar challenge in a previous post. Recall that:

Finally, having solved the equaion we use its solution to compute:

Let’s implement the method, and then discuss one of its important properties:

Before running an experiment, let’s discuss an important property of our optimizer. Look at the last line in the code above - the next iterate is the result of the soft-thresholding operator, and we saw that it zeroes-out entries of whose absolute value is very small (). Consequently, the algorithm itself reflects the sparsity promoting nature of L1 regularization - we zero-out insignificant entries!

The above property is exactly the competitive edge of the proximal point approach in contrast to black-box approaches, such as SGD. Since we deal with the loss itself, rather with its first-order approximation, we preserve its important properties. As we will see in the experiment below, AdaGrad does not produce sparse vecotrs, while the solver we implemented above does. So even if we did not have the benefit of step-size stability, we still have the benefit of preserving our regularizer’s properties.

Since my computational resources are limited, and I do not wish to train models for several days, we will use a rather small data-set this time. I chose the spambase dataset available from here. It is composed of 57 numerical columns, signifying frequencies of various frequently-occuring words, and average run-lengths of capital letters, and a 58-th column with a spam indicator.

Here is a possible result of the sample function, which samples 4 rows at random:

Now, let’s normalize all our numerical columns to lie in , so that all our logistic regression coefficients we will be at the same scale (otherwise, L1 regularization will not be effective):

Now, let’s create our PyTorch data-set, which we will use for training:

And now, let’s run the optimizer we wrote above, LogisticRegressionL1, to find the weights of the regularized logistic regression model, with regularization parameter . Since this post is on optimization, we refer readers to standard techniques for choosing regularization parameters, such as K-fold cross-validation. Since our proximal point optimizers are quite stable w.r.t the step size choices, I just arbitrarily chose .

Here is the output I got:

After 40 epochs we got a parameter vector with several zero entries. These are the entries which our regularized optimization problem zeroes out, due to their small effect on model accuracy. Note, that increasing puts more emphasis on regularization and less on model accuracy, and therefore would zero out more entries at the cost of even less accurate model. Namely, we trade simplicity (less features used) for accuracy w.r.t our training data.

Running the same code with produces training loss of , while the data_loss we see above is . So we indeed have a model which fits the training data less, but is also simpler, since it uses less features.

After some time, I got the following output:

Well, it seems that none of the vector’s components are zero! Some may think that maybe AdaGrad has not converged, and letting it run for more epochs, or with a different step-size will make a difference. But, unfortunately, it does not. A black-box optimization technique, which is based on a linear approximation of our losses, instead of exploiting the losses themselves, often cannot produce solutions which preserve important properties imposed by our loss functions. In this case, it does not preserve the feature-selection property of L1 regularization.

Up until now we have laid the theoretical and computational foundations, which we can now use for non black-box optimizers for a much broader variety of problems, much beyond the simple ‘convex on linear’ setup. Our foundations are: the proximal viewpoint of optimization, convex duality, convex conjugate, and Moreau envelope.

Two important examples in machine learning come to mind - factorization machines, and neural networks. Losses incurred by these models clearly do not fall into the ‘convex on linear’ category, and we will see in future posts how we can construct non black-box optimizers, which exploit more information about the loss, to train such models.

Before we proceed to the above interesting stuff, one foundational concept is missing. Despite the fact that it doesn’t seem so at first glance, the stochastic proximal point method is a gradient method: it makes a small step towards a negative gradient direction. But in contrast to SGD-type methods, the gradient is not , but taken at a different point, which is not . The next post will deal with this nature of the method. We will mostly have theoretical explanations and drawings illustrating them, and see why it is a gradient method after all. No code, just theory. And no lengthy math, just elementary math and hand-waving with drawings and illustrations. Stay tuned!