Throughout our journey in the proximal point land we looked for efficient implementations for minimizing the average loss \(\frac{1}{n} \sum_{i=1}^n f_i(x)\) using the stochastic proximal point method: at iteration \(t\), select \(f \in \{f_1, \dots, f_n\}\), and compute

Since for a general function \(f\) the above is intractable, we covered special and interesting functions \(f\) of practical value to the machine learning community: convex on linear, and regularized variants with an L2 and a generic regularizer. For all of the above, we derived an efficient algorithm to compute \(x_{t+1}\), but our derivations shared one thing in common - we only considered training on one sample at each iteration.

Training by exploiting information from one arbitrarily training sample from the entire training set at each iteration is quite noisy. A standard practice is reducing noise by selecting a mini-batch of training samples, and their corresponding incurred losses, at each iteration. In the following sequence of posts we will derive the mini-batch version of the proximal point algorithm, by following along lines similar to our derivation for convex on linear losses.

The proximal view on mini-batching

Let’s begin by re-interpreting the mini-batch version of stochastic gradient descent: at each iteration, select a mini-batch of samples \(B \in \{1, \dots, n\}\) and compute:

Recalling the proximal view we discussed at the beginning of the series, the mini-batch SGD step can be written as

The red part is, as usually, a proximal term penalizing the distance from \(x_t\). The blue term is a linear approximation of \(\frac{1}{\vert B \vert} \sum_{i \in B} f_i(x)\), which is the average loss of the mini-batch. Consequently, we can interpret mini-batch SGD as:

The balance is, as previously, determined by the step-size parameter \(\eta\). If we avoid approximating and instead use the functions directly, we obtain the mini-batch version of the stochastic proximal point method:

The challenge is, as before, computing \(x_{t+1}\). In this and some of the following posts we will consider the convex on linear setup, and derive efficient algorithms for solving the proximal problem

More than a taste of convex duality

The function \(q(s)\) is defined by an optimization problem without constraints, which is parameterized by prices \(s_i\) for violating the constraints \(t_i = a_i^T x + b_i\). Now, we can derive the following careful, but simple result:

The inequality holds since minimizing over the entire space produces a smaller value than minimizing over a subset. The observation means that \(q(s)\) is a lower bound on the optimal value of our desired problem. The dual problem is about the finding the “best” lower bound:

Conclusion (b) of the strong duality lets us extract the optimal \(x^*\) given the optimal \(s^*\). So, if the dual problem can be solved quickly, we can obtain an efficient algorithm for solving the original problem. Readers who are interested to learn more about duality are referred to the excellent book Convex Optimization by Boyd & Vanderberghe, which is available online at no cost.

Note, that the dimension of \(s\) is exactly the size of the mini-batch. In the extreme case of \(\vert B \vert=1\), the dual problem is one-dimensional. In general, mini-batches in machine learning are typically small (\(\leq 128\)), and there is plenty of literature and software aimed at solving low-dimensional optimization problems extremely quickly, and we will discuss some of them in the this and the following posts.

Let’s apply convex duality to derive an algorithm template for solving (PROX) defined above. A fair bit of warning - this part is a bit technical.

Since duality requires constraints, let’s add them by defining the auxiliary variables \(t_i\):

where the last equality follows from separability2. Despite its ‘hairy’ appearance, the blue part is a simple quadratic optimization problem over \(x\). Taking the derivative of the term inside \(\min\) and equating with zero, we obtain

while the optimal value obtained by plugging \(x^*\) into the formula inside the blue \(\min\), after some math, is

The red part can be re-written as

where \(\phi^*\) is the familiar convex conjugate of \(\phi\). To summarize, the dual aims to maximize

It might look a bit hairy, but all we have is quadratic function of \(s\), a linear functions of \(s\), and the term colored in red, which is the only part which depends on the function \(\phi\).

Based on the strong duality theorem, we have the following algorithm template for computing \(x_{t+1}\):

The challenging part is, of course, finding a maximizer of \(q(s)\).

Before we jump into concrete examples and write code, let’s compare the method we obtained with mini-batch SGD. The mini-batch version of SGD would compute

while according to step (2) in the algorithm above, the proximal point method is going to compute

Apparently, both methods step in a direction obtained from a linear combination of the vectors \(a_i\). But while SGD multiplies each vector by derivatives of \(\phi\), which correspond to a linear approximation, the proximal point method uses coefficients \(s_i^*\) obtained by considering exact losses via duality.

Using some linear algebra, we can re-write the function \(q(s)\) above in a more compact form, which allows us to use the existing linear-algebra machinery built into many framework, such as PyTorch and NumPy, and cooperate nicely with how mini-batches are given by PyTorch’s DataLoader class.

Linear least-squares is interesting because it is one of these rare occasions where we are going to get a closed-form formula for computing \(x_{t+1}\) in the mini-batch setting. We aim to minimize

We are at luck! Why? We got a concave quadratic \(q(s)\), and quadratic functions have linear gradients. Thus, maximizing \(q(s)\) is done by solving the linear system of equations \(\nabla q(s) = 0\):

The expression is well-defined since the matrix denoted by \(P_B\) above is symmetric and positive definite, and thus invertible. Usually, we don’t like inverting matrices, since it is an expensive numerical operation. But this time we have a linear system of only \(\vert B \vert\) variables, which can be solved in a few microseconds for small enough mini-batches batches.

Let’s implement a PyTorch version of the optimizer. To make it a bit more efficient, we will exploit the positive-definiteness of the matrix \(P_B\) to solve the linear system using Cholesky factorization, instead of just calling torch.solve().

We had to remember a bit of linear algebra, but now we have a mini-batch stochastic proximal point solver for least squares problems, which should be stable w.r.t its step size.

Working with a larger family of functions \(\phi\) will be addressed in future posts. In this post - let’s see if mini-batching helps us.

Let’s test our new shiny optimizer on the Boston housing dataset, and see how mini-batching affects its performance. The code is also available in this git repo. We will try to predict housing prices \(y\) based on the data vector \(p \in \mathbb{R}^3\) comprising the number of rooms, population lower status percentage, and average pupil-teacher ratio by the linear model: \(y = p^T \beta +\alpha\)

To that end, we will attempt to minimize the mean squared error over all our samples \((p_j, y_j)\), namely:

Since data extraction and cleaning is not the focus of this blog, we will assume our training data is already present in the boston.csv file, and we start from there. First, let’s see that the optimizer works, and we can actually train the model.

Now let’s train our model with batches of size 1, as a sanity check, just to see what we get. I arbitrarily chose a step size of \(0.1\), since the method’s performance should be quite stable w.r.t the step size choice:

I got the following output:

Ah! An improvement! Indeed, reducing the stochastic noise by increasing mini-batch size indeed improves the algorithm - a mini-batch of training samples is a less noisy approximation of the entire training set than just one sample.

After approximately 30 minutes the losses data-frame contains the results, and now we can produce our plot:

Here is what I got: 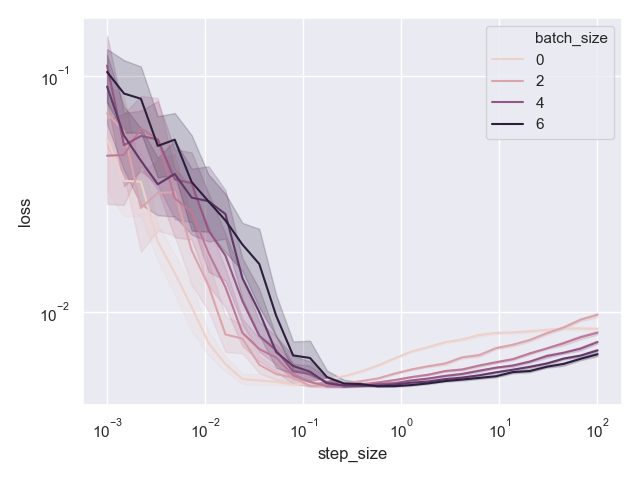 Seaborn’s hue coding is a bit confusing, since we don’t really have a batch size of 0, but it is clear that darker is higher. We can see that for small enough step sizes the method does not perform well. It is not surprising - taking small steps leads to slow convergence, and we are going to need much more than 10 epochs to converge. However, for a large range of step sizes beginning at approximately \(0.1\), the performance of the method is quite stable. Even for step sizes as large as \(10^2\), the method does not diverge!

Moreover, we clearly see that mini-batches improve the performance whenever we do converge to something plausible. Let’s plot the same data, but focused to step sizes at-least \(0.1\).

Here is the resulting plot: 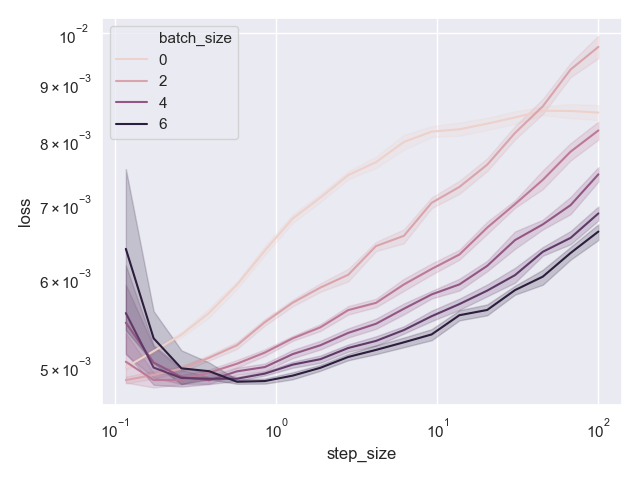 Consequently, we are going to talk about methods for solving the classical optimization problems which involve maximizing \(q(s)\) we derived in this post. Using the above, we will be able to build mini-batch optimizers for a variety of convex-on-linear losses. Stay tuned!